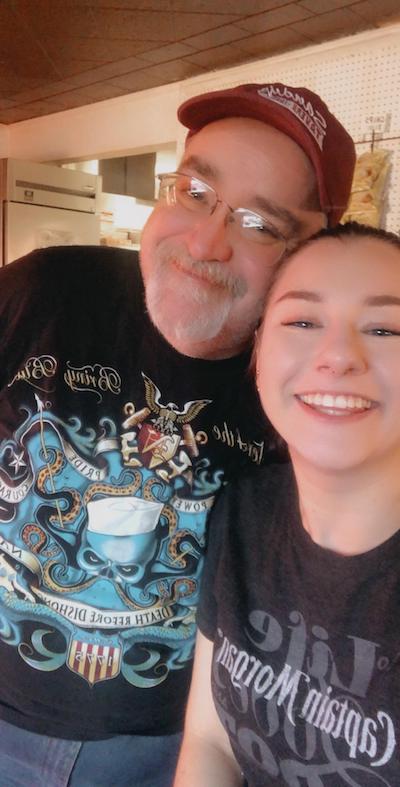 Sandy’s Tavern has been open since 1933 and like many Richfield restaurants, is adapting in this strange time to not only serve its loyal customers (they continue to offer curbside pickup throughout the COVID-19 outbreak), but to stand with dedicated employees, like Kevin Parks and Anna Hans.

Kevin has worked at Sandy’s for 28 years, and his willingness to step up in this time of crisis is why Sandy’s is continuing to feed Richfield and surrounding areas with curbside takeout. Anna has been at Sandy’s for 4 years, and stepped up during the pandemic as the Sandy’s team has become family to her.

Kevin and Anna have a work ethic that inspires those around them to keep fighting—to keep going. They have come through the recent change in management at Sandy’s as natural leaders, and that leadership is even more present today as the restaurant continues to make its famous burgers and fries for local residents.

The best part about Sandy’s to Kevin and Anna? The people. “Our staff is a tight-knit bunch. Even on our days off, we spend time with each other,” says Anna. “And, over the years, we’ve become so close with many customers that they have become friends—’family’, in many ways.”

Fact is, Sandy’s regulars are the true backbone of the restaurant. “The fact that they have come out to support us as much as they can during the pandemic has meant the world to us,” says Kevin. “Each of our neighbors are not only holding strong, but helping others to be strong too.”

Case in point: one well-loved Sandy’s regular of 40 years, Hank, recently passed away. Kevin had known Hank since he was 8 years old. Not only was Hank a fan of Sandy’s food and service, but he had even done some plumbing work at Sandy’s over the years. To honor his memory, Hank’s family called in an order for 14 cheeseburgers to celebrate his life with dinner from his favorite place.

Another example: during the holidays a few years ago, Kevin’s Jeep wasn’t running right. As a result, it was looking like he wouldn’t be able to see his mother for the holidays in International Falls. But, a loyal Sandy’s customer cashed in his frequent flyer miles to buy Kevin a plane ticket to see her. What a gift!

And, when Kevin’s mother passed, another Sandy’s regular—a pastor—kept an eye on him. “I remember him asking me how I was doing, and I told him I was doing OK, but I just had one regret: that my mother had always wanted me to be baptized,” says Kevin. “The regular never missed a beat and baptized me right in booth #5!”

These stories are the number-one reason that Sandy’s remains open. According to Matty O’Reilly, general manager, it’s the people who keep him—and the team—going.

For Matty, it’s also about protecting generations of memories like the ones Sandy’s has helped create over the past 87 years. “If it’s the last thing I do in business, I will do my best to keep the dreams and memories of Sandy’s alive with Kevin and Anna by my side,” says Matty.